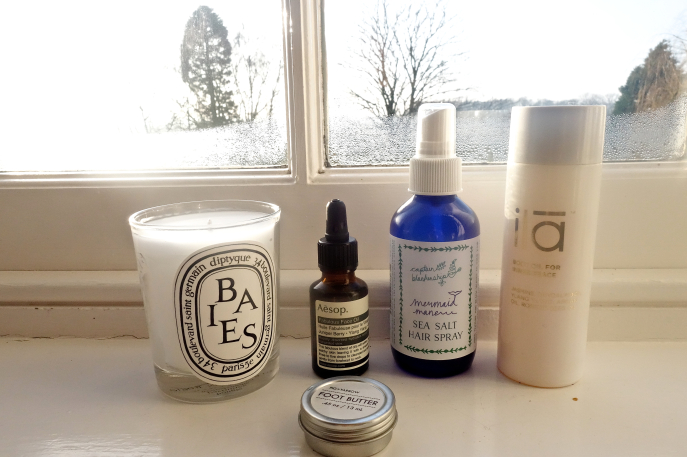 There’s nothing better than a dose of winter sun but holding onto that holiday feeling once home can be tricky when there’s central heating and icy temperatures to contend with… Since I’ve been back from Sri Lanka my glowy, golden skin turned into scales pretty much overnight so I’ve had a bit of a battle on my hands to save from turning 100% reptilian.

My weapons of choice? Ila Body Oil for Inner Peace and Aesop Face Oil, both of which are helping to lock in those rays for just a bit longer… They both have jasmine in them and thus smell like an afternoon in the tropics after it’s rained which ain’t bad for keeping the holiday memories alive too. Fig & Yarrow’s Foot Butter is doing the same for my toes. I slather it all on at night before pulling on my thermal PJs and cashmere socks (sexy negligee need not apply at Christmas) in an attempt to stop myself from being a prune by morning.

Jamie gave me some aptly named Mermaid Sea Salt Spray from Cat Bird in New York for Christmas (and a beautiful ring and bracelets which I’m sure you’ll be seeing v soon), which again smells good enough to eat and makes me feel like I’m back in Tangalle getting tossed around in the waves. Only slightly less bedraggled… My annual Diptyque Baies candle from Father Christmas is the final part of my ‘keep summer alive’ kit and makes a refreshing change in time for the new year after weeks of cinnamonny, clovey, log cabin scents wafting around.

Just grab a coconut water, close your eyes and ignore the chillblains and imagine it’s 30 degrees outside….