September 16, 2013
If you follow me on Facebook and/or Instagram will have gathered that I moved house a few weeks ago and as a result have been fairly preoccupied with sourcing cheap furniture, scouring Ebay for dining tables and generally having my entire attention diverted towards all things home-related. And after lots of requests, I thought I’d share a few snaps of our new flat and some favourite bargain finds I’ve picked up along the way.  The place was  unfurnished when we moved in and aside from a couple of bits I had already, we really had to start from scratch. Within about 10 days of moving in though it was pretty much done with everything aside from the sofa and bed being second-hand in order to keep costs down.
We sourced lots of stuff from Sunbury Antiques market at Kempton race course just outside London- scroll to the bottom for a few hints and tips if you’re thinking of making a trip there. I’m already hankering for a return visit… 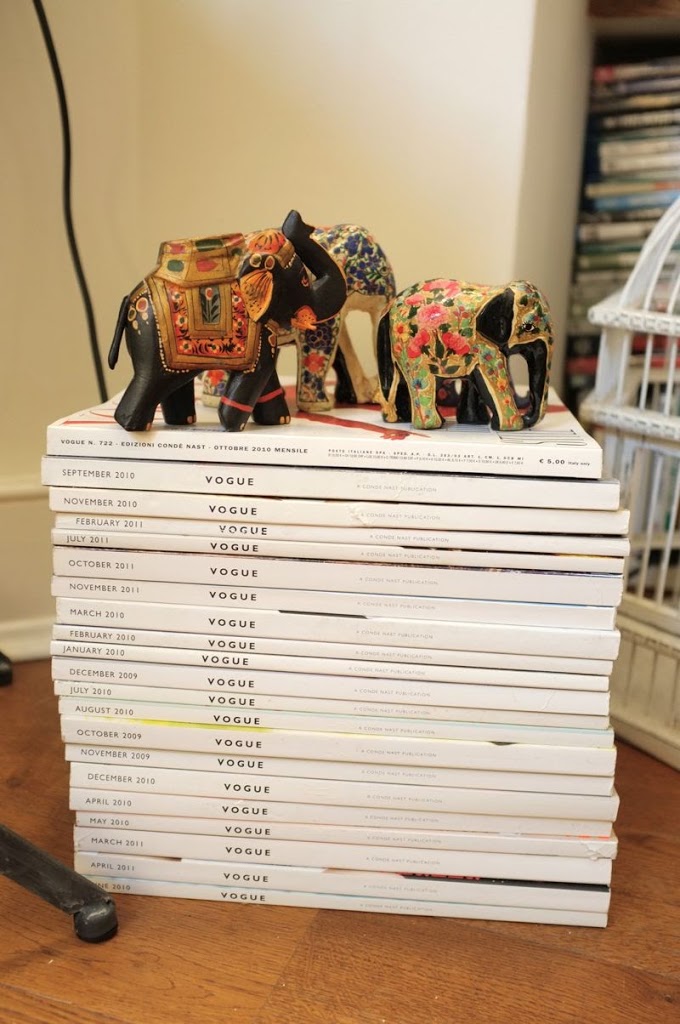 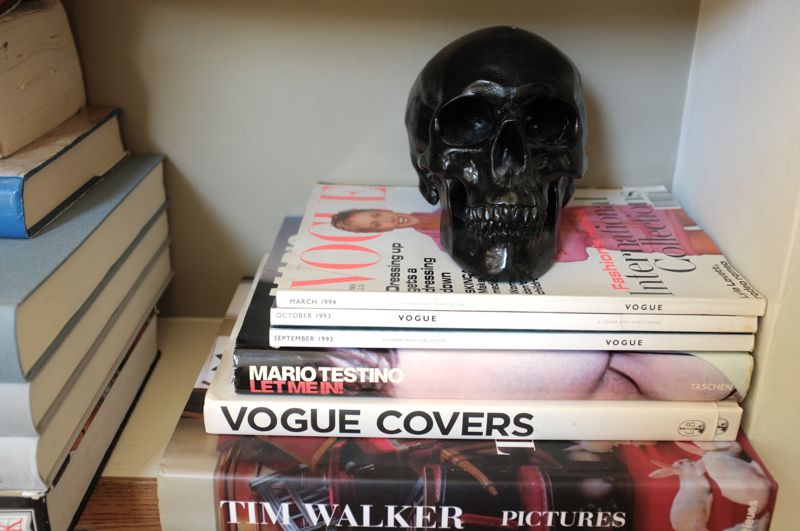 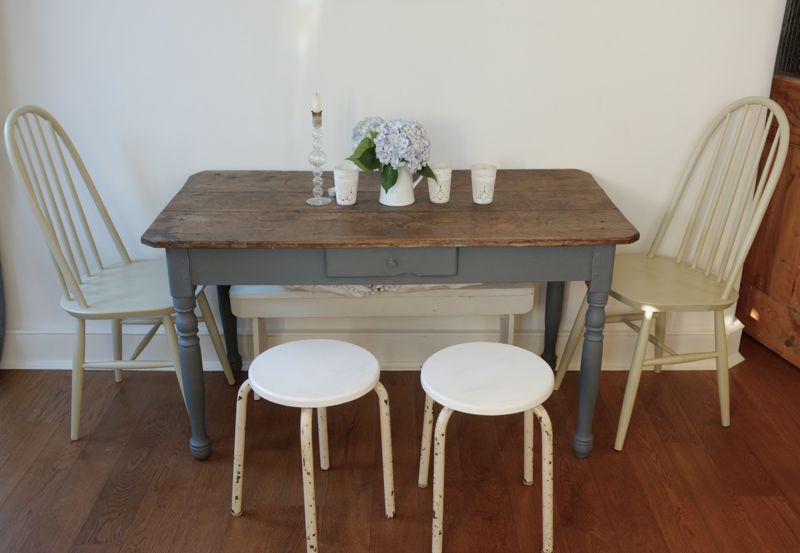 After a 2 weeks of constant Ebay trawling, I finally found the perfect kitchen table via Boathouse Originals. It was originally painted dark blue but they very kindly repainted it for me in this dark grey chalk paint by Annie Sloan. I love how worn the top is – it means no one has to be precious about spilling stuff or using a dreaded coaster.
I found the chairs in a local shop near my parents house while the stools and bench (just seen on the far side) all came from Sunbury. The stools cost £10 each and I think the bench was about £25. I repainted the tops of the stools white as they were originally a varnished wood yellow-y wood that clashed with the floor and table top. It’s a very small space so the bench works really well as the table can be pushed against the wall until we have people round. I’ve since got some new cushions for the bench and chairs so it no longer looks quite so bare! 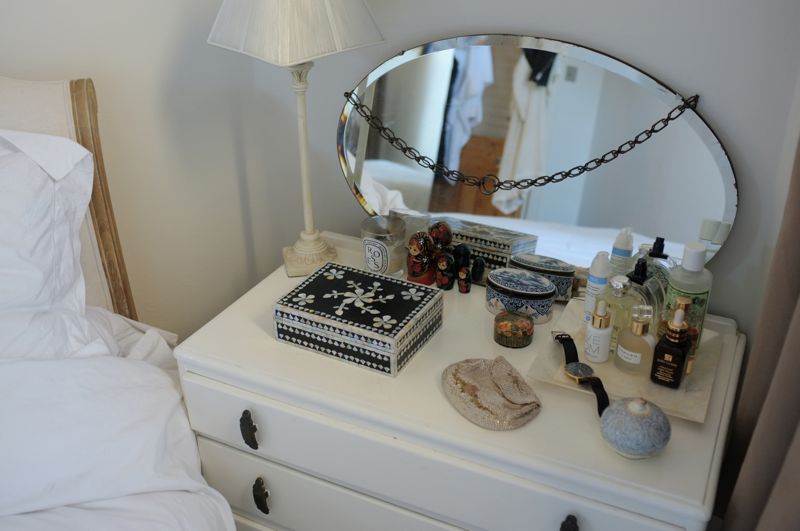 The vintage 1930s mirror was via Ebay and the chest of drawers was the best bargain of Sunbury at only £10. I looked at others that were £70-90 so I couldn’t really believe my luck with this one. I eventually want to strip it and repaint in a matte light grey but the gloss white will do for now. 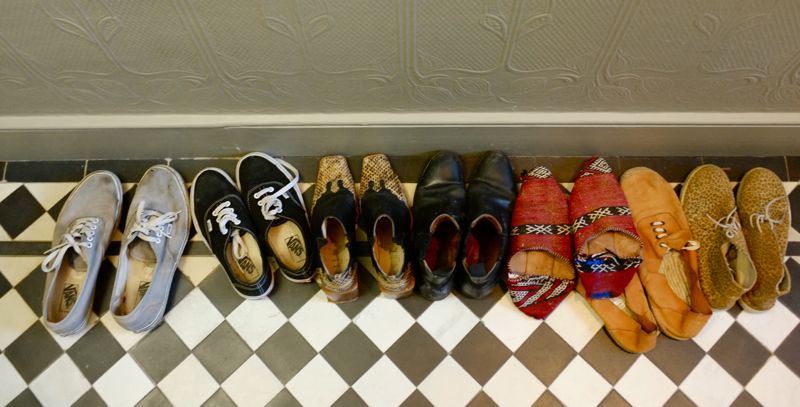 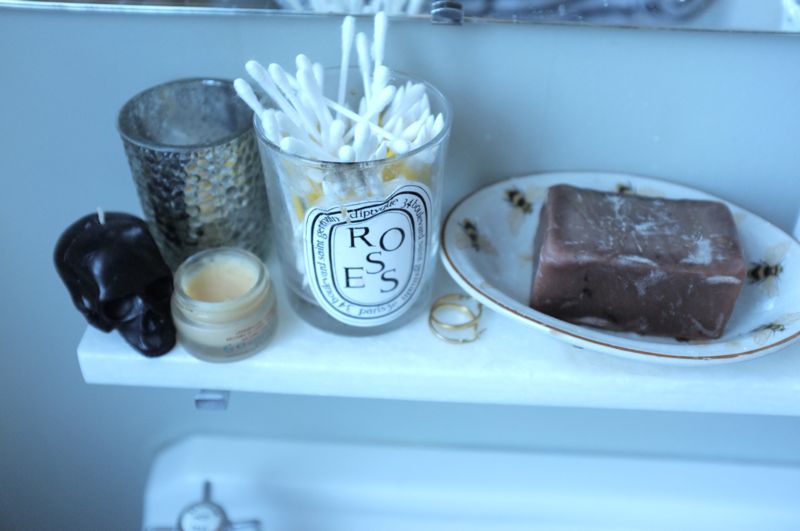 I never throw away a Diptyque candle – I just use boiling water to get the last bit of wax out and then use for storing make-up brushes/cotton buds. Also in the shot is my favourite lip balm by Nuxe (it has to live on the bathroom shelf or I’ll loose it in a day!) and my new little black skull candles Jamie bought for me when in New York. 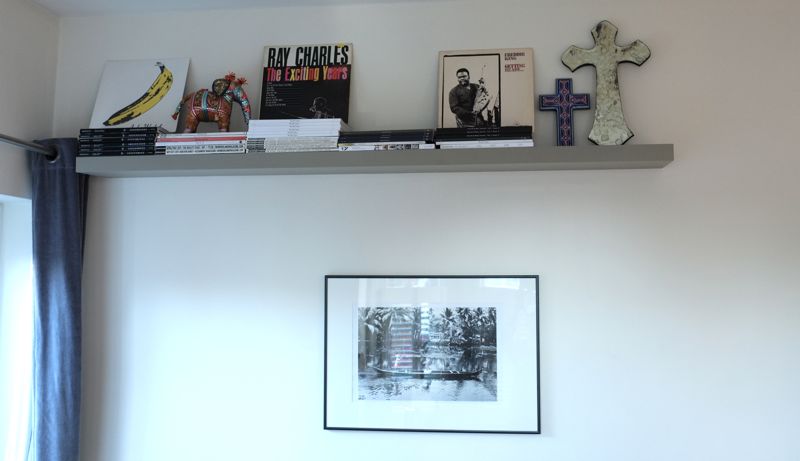 Records, magazines and favourite keepsakes picked up on our travels have found a home on the shelf above our dining table. I love catching a glimpse of my crosses up there. 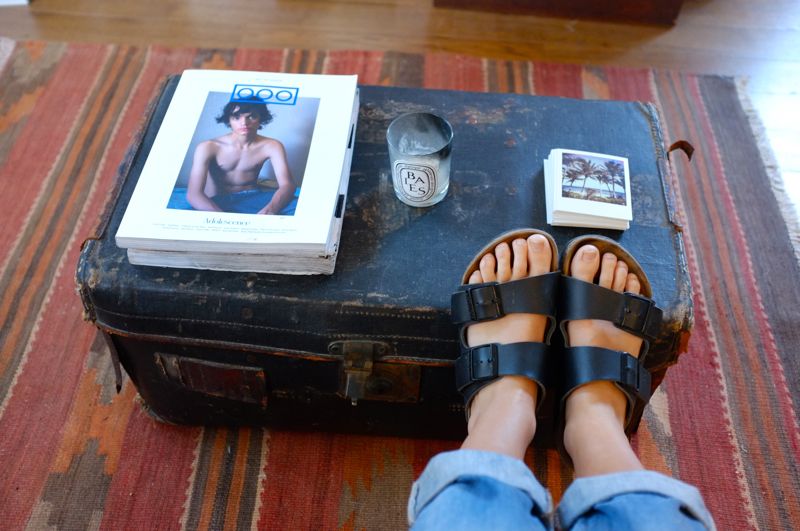 I knew I wanted a trunk for a coffee table so that was one of the first things we hunted for when we arrived at Kempton.  I’d been looking on Ebay and visited vintage stores before Kempton but to no avail so this was the final push in the search! I ended up spying this beaten-up black one under a tressel table. It wasn’t actually for sale initially – it belonged to the trader who used it as storage! – but luckily it was ours for £40. The Kilim rug also came from Kempton and we managed to get a pretty good deal on that and the one below for the hallway. 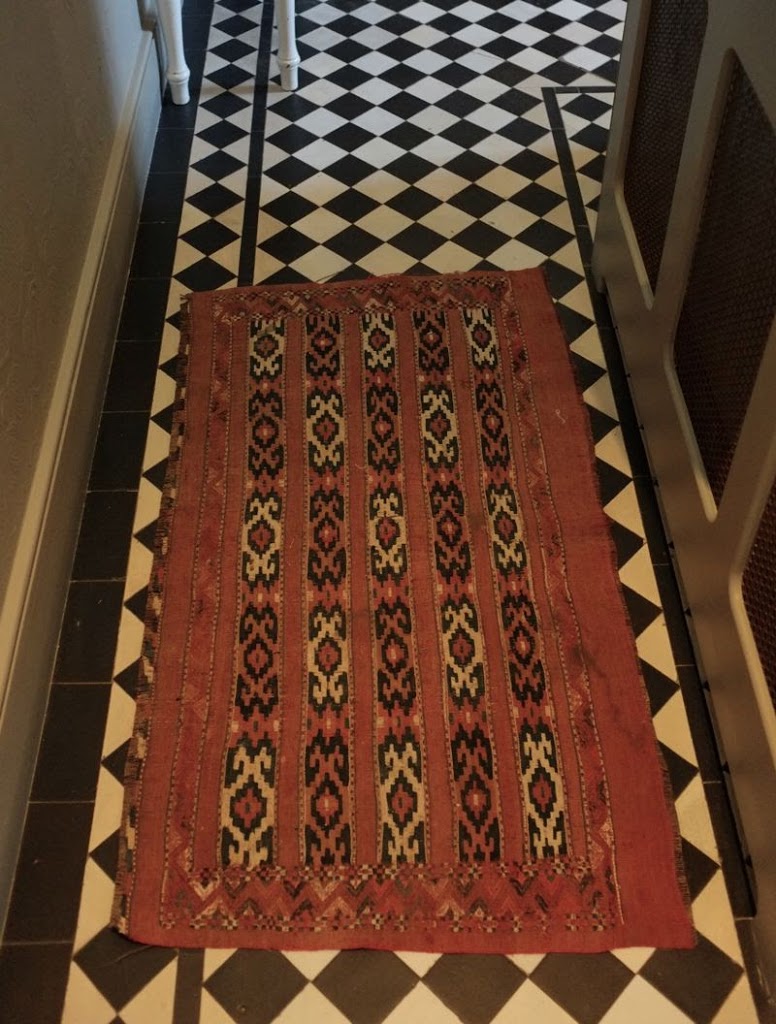 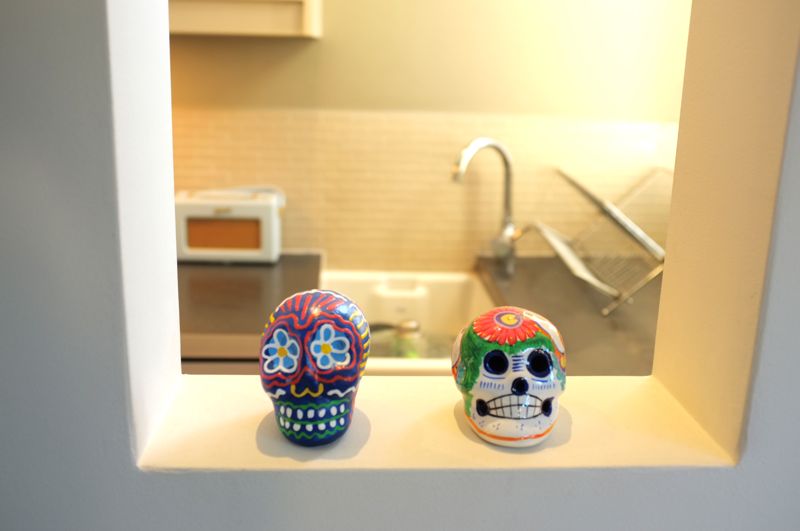 My skulls in their new home. The blue one is from L.A, the white from Tulum. 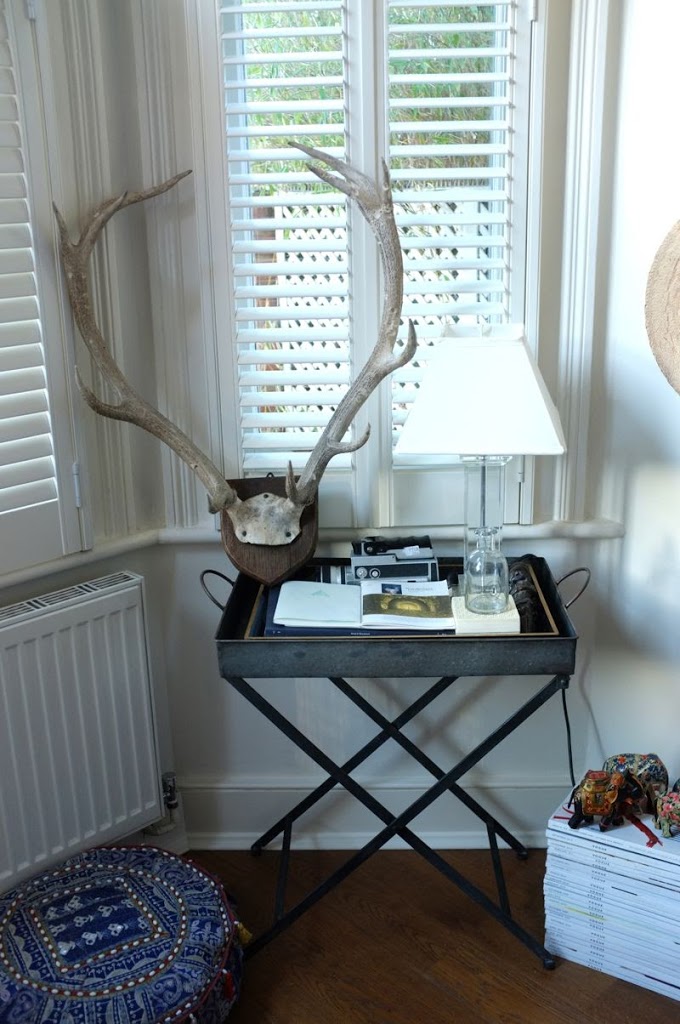 Much to Jamie’s dismay, I insisted on buying these vintage antlers at Kempton. But for £40 (they go for closer to £100 on Ebay) I couldn’t not. At the moment they’re living perched on my new zinc butler’s tray from Cox and Cox. 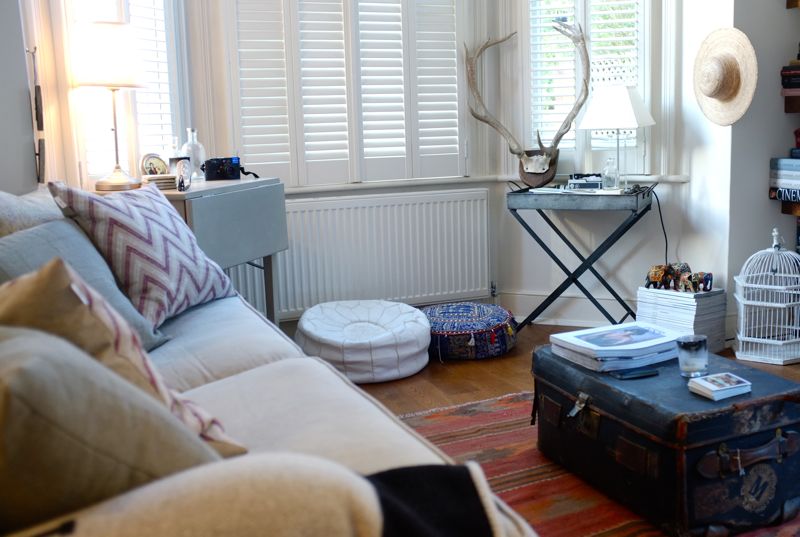 A brief glimpse of our cosy living room. It’s getting there! 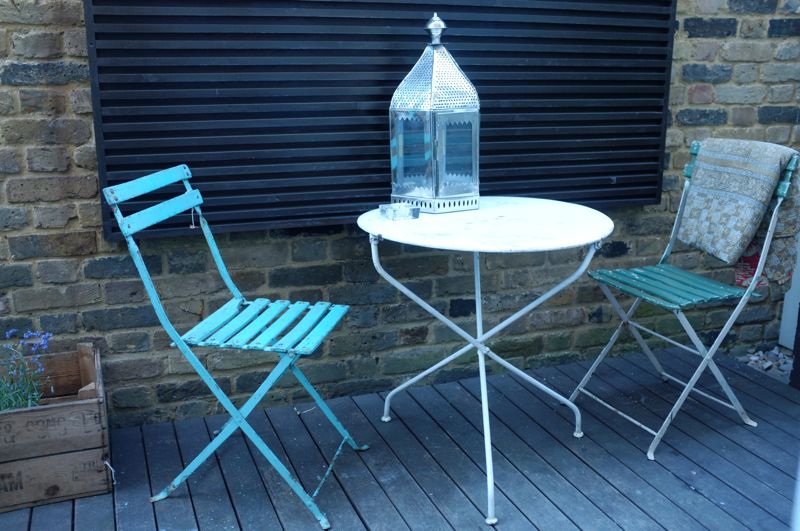 And last but not least, the 1920s antique bistro set for our new garden, also picked up at Kempton.  The whole set cost us £90 which isn’t bad considering some individual vintage chairs like these on Ebay are fetching £40-50.  I saw a table like this for £100 in a French-style antiques shop recently so £90 for all three ain’t bad. I love the fact they’re not matching or immaculate either and are already stained and worn-takes the pressure off having to keep them perfect!
And finally, a few tips I’ve picked up along the way….
….for furniture shopping in general:
….Sunbury Antiques market specifically: