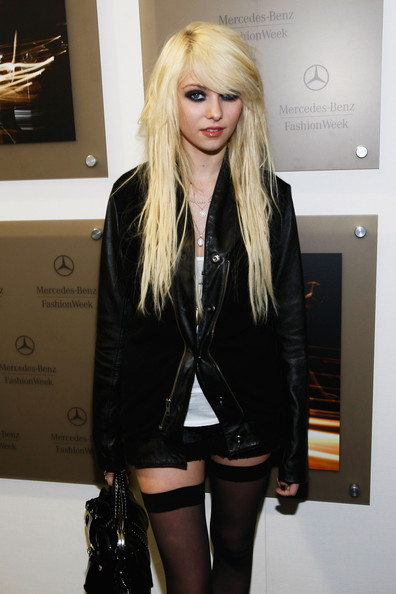 When it comes to style, it’s often true that those who break and rules and colour outside the lines in their fashion choices are the real style mavericks, and whilst I’m not normally a real heckler for limiting and restictive so-called style ‘rules’ which often just instill fear and doubt in the everyday dresser, I do think Taylor’s post-coital get up is just one rule-break too far.  I can do sheer, cut out, ripped, shredded and dip-dyed but, call me old-fashioned, I’m still a firm believer that sheer hold up stockings should stay well within the bedroom/brothel, particuarly when teamed with a just-been-kissed lip and a bedraggled bed head. I know there’s loads of people out there who love this girl but for me Taylor’s outfit is a prime example of crossing the line from dishevelledly coy to just plain slutty.  This is even more wrong when you consider she’s still eligible to join the Brownies.  Perhaps some baking and tent-builiding might sort her out…